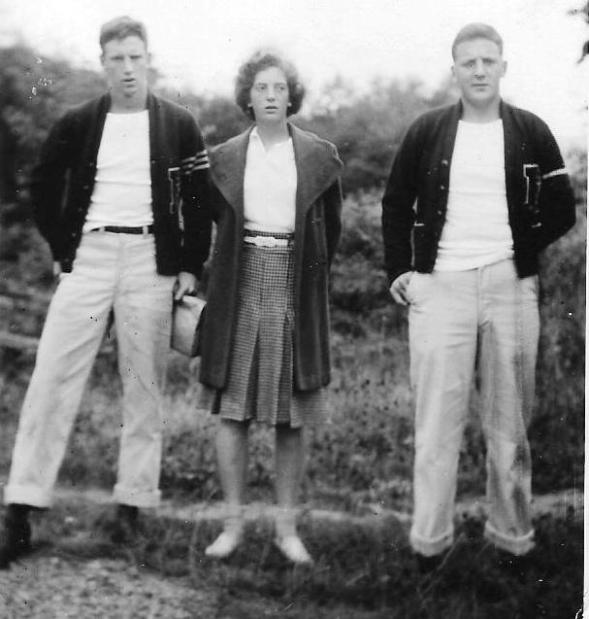 From Vern and Betty Gillaspie came the children Wayne, Cleo, and Rex.

Wayne Gillaspie is my dad. If I’ve seen this image before, I don’t remember. You can tell these three didn’t practice smiling at a camera much.

If it was a color picture, you’d see plenty of dark red hair. That’s right, gingers.

They grew up going to school in Ryderwood, Washington. It was a timber town, a company town. Working in the woods was a given.

The two boys joined the Marines and went to Korea. I doubt the North Koreans and Chinese enjoyed their company. My old man looks like he wants to take someone out right now.

I think of my dad around his birthday and do an update on what he’s missed. You see, I’m the only family member to attend all three funerals. I sang at my dad’s, spoke at my uncle’s, and kept quiet for my aunt. A close look at all three shows she had more on her mind than the others. Respect means leaving room for others to talk.

Besides, she was my favorite aunt. If her look says, “get me out of here,” it’s understandable.

Rex and Cleo had memorials in Vader, Washington. Wayne had a full-blown funeral in Klamath Falls that included a twenty one gun salute and beers afterward at the Marine Club.

Those who came to the funeral included his horse, Stretch. As the proceedings began, the horse got jumpy. Then it got excited in a way not fit for a graveside service, but no one said anything. It took lots of focus.

Toward the end of dad’s funeral came the time scheduled for everyone to sing the first verse of Amazing Grace.

It was a beautiful rendition. I was so moved, I sang it again. Most of the crowd joined in. The third time had more dropping out. The fourth time it was nearly a solo. We weren’t a singing family in general, so I got it in at the last chance. Amazing Grace has plenty of other verses, but the first is the most memorable.

The last act before leaving the graveyard was a walk-by to drop a handful of dirt in daddy’s grave. Like singing Amazing Grace, I took several turns. Then I started in with a shovel.

Taking my lead, others dropped shovel loads of dirt into the hole. One of the guys had the idea of sending the burial crew away and finishing the job ourselves. It’s not as easy as it sounds. You have to lower the casket into the cement vault, then the heavy cement lid on top before adding the rest of the dirt.

The last thing you want to do is drop your dad while lowering him into the ground. Flashes of an Iranian mob carrying the Ayatollah’s box through Tehran came to mind. Somehow they dropped him, or lost their grip, and there was Khomeini’s arm flopping around. After the horse’s display earlier, we didn’t need anything else flopping around.

Lowering the cement cap over the casket was incredibly hard. The think weighed more than the casket, as if the funeral industry wants to protect the living from a dead man pushing up. All I wanted to avoid was a last incident of crushing the old man with a cement slab. How many shrinks have dealt with that problem in surviving children? I wasn’t going to be the first.

We took the dirt and sweat to the Marine Club and drank right afterward.

The next day some of us gathered at dad’s home, which was about a hundred acres on former Indian reservation land. We loaded up guns and got into his truck and drove to the river. He didn’t like the idea of shooting on his property, but we gave our own three gun salute in farewell. The joke of that day was the humming sound. You could hear it if you listened carefully. It was the old man spinning in his grave.

Just as it began getting dark, we loaded up a hook with a grasshopper and cast into the river. Since it was a symbolic gesture, and no one remembered anyone catching a fish there, I handed the reel and rod to my youngest son. All he did was hook a fish. He got help landing it, but it seemed like a good sign.

As far as reviewing what dad has missed since he died, he hasn’t missed a thing. I tell him all about what’s new all the time. He’s probably reading this before I write it.

Hey Wayne, it’s still all about you. And I still miss you, Dad.