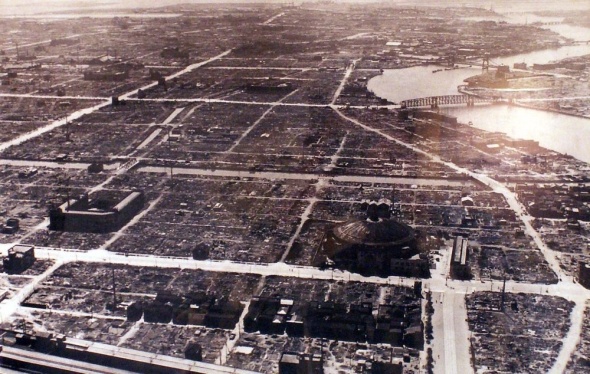 In 1941, the Japanese military didn’t hold much back when they hit Hawaii.  If they blasted Pearl Harbor thinking they’d catch everyone asleep, then they planned right.  How many times have you seen the bombs exploding and ships detonating?  Enough times to grow numb and turn the page?

For days of infamy, Pearl Harbor stands alone.  How many times can you see ships roll over and fire on the water?  How often does it look like any other battle from any other war?  The further we get from the scene, and the fewer surviving witnesses of the attack, the easier it is to see Pearl Harbor in a greater context.

If nuclear weapons unleash the unspeakable horror of war, do conventional weapons speak in a gentle voice?

The movie, The Fog of War, includes a chart listing Japanese cities and American cities roughly the same size.  Separating the columns is a percentage number of how much of the Japanese cities were destroyed in bombing raids.  Tokyo/New York – 51% destroyed with sixteen square miles on fire; Nagoya/Los Angeles – 40% destroyed.

Toward the end of 1941 the idea of another world war wasn’t new.  Germany was busy.  Japan was busy.  America was lending and leasing.  Stalingrad would set the tone for war; it would go to the bitterest of ends.

It did for some people.

Ask yourself what it would take to surrender unconditionally if you were a national leader.  Would ten of your cities getting bombed do it?  Twenty?  Thirty?  Japan had sixty six cities blasted before the nuclear bombing of Hiroshima and Nagasaki, and one more afterward.  The Honshu city of Toyama, equal in size to Chattanooga, was 99% destroyed in firebombing raids.  Amagasaki, linked to Jacksonville in size, was 18.9% destroyed.  It ranked lowest in bomb damage.

What would it take for a nation to capitulate?  How many English cities did the Germans hit?  They didn’t quit.  How many ruined cities did France absorb before they surrendered to Germany?

The reason the U.S. eased up the B29 bombing campaign over Japan was lack of bombs.  Just like the Japanese took it to Pearl Harbor with everything they could carry, the U.S. used the same tactic.

What’s the difference between bombing, terror bombing, and firebombing?  If you’re on the receiving end, it’s all BOOM out go the lights.  Only in retrospect can you make a case for fairness, for evenness, for getting even.

How many of those on the ground at Pearl Harbor felt remorse for Japan in the late stages of war?  If you’re looking for fairness and a kind word, don’t ask the families of war dead.

Proportionality isn’t in the cards for a nation fielding an army that recruited Comfort Women, who used pitch forks for crowd control, who invented the Kamikaze.  Sixty-seven firebomb raids and two nuclear attacks were the order of the day, along with a seat at the surrender table on the USS Missouri.

What can we learn from Pearl Harbor, December 7, 1941 that applies to December 7, 2009?  Don’t execute a sneak attack on America.  We hate that stuff.  Regardless of the ideology or perceived success, you’re not going to like the response.  It will be so out of proportion with the initial act that you will wonder why you agreed to the plan to begin with.

Every war since WWII ended badly for America, but they are ruinous to the countries fought in.  Every family that loses a loved one in war is marked forever, but worse if they die in vain.  Peace is the only answer, and a lasting peace is the only result worth the sacrifice.