Ethnic food where I grew up meant opening a can of spaghetti-Os.  The only Chinese restaurant in town sold more hamburgers than hot chicken and rice.

The cook in the family, my Dad, grew up in a logging camp eating logger food.  He joined the Marines during the Korean War and came back with a Purple Heart, a Silver Star, and the Marine recipe for SOS, chipped creamed-beef on toast.   He said the Marines had better food than loggers.  Neither has a kitchen you want to visit on purpose.

If the path to man’s heart runs through his stomach, and an army marches on its stomach, what goes on in there?  The stomach is a constant, the food varies.  Why?  Catch a bad meal at your girlfriend’s place, or miss a day of food, and you feel like you’ve been kicked in the gut.  Take care of your stomach and it takes care of you.

On the other hand, you’ll eat most anything if you’re hungry enough, which is a good time to try new food, old food, any food.  This is when you’re likely to believe that culture begins in the kitchen.  You want to understand.  You want to be in that kitchen.  Any kitchen.  Anywhere.

I was haunted by kitchens, but not anymore.

Inviting friends to join a cooking class in your house is a way to learn about a culture without the travel.  We invited a dozen people and the author of a Lebanese cookbook to dinner.  Linda Dalal Sawaya taught a class with recipes from her book, “ALICES’S KITCHEN.” 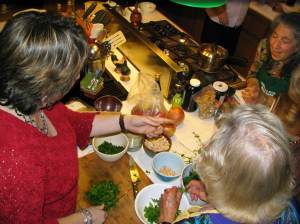 A stomach has never had better care.

Every ingredient was the freshest available on the market.  We bought everything on Linda’s shopping list from a world food grocery store.  The Lebanese owner knew her.  He made a few recommendations that she may add to her next book.

I came out of the grocery store feeling like I’d been on vacation.  Lithuanian Beer?  Polish beans?  The United Nations assembly could lunch there and all find something familiar.  Lebanese wine?  No problem.  Lebanese cheese?  Check.  Mechaalany (Lebanese pickled thyme?)  Huh?

“How do you eat that?”  It was a fair question about a jar of stems and roots.

“Like a pickle.  Put it on a plate and use as the finishing touch on a cracker.”

The first rule in class was a ban on alcohol during food preparation.  Maybe it’s a Lebanese custom ingrained through centuries of chopping ingredients with sharp knives, maybe a modern safety issue.  I voluntarily switched from cooking student to documentary photographer and Lebanese beer taster. 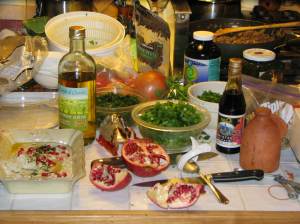 The students chopped for hours, but the end was worth it.  Calling the results the best food of my life wouldn’t be fair to my Dad’s SOS, but that’s what it was.  The chicken was more than chicken, which is a cross cultural standard.  The stuffed eggplant linked my fork-hand to my autonomic nervous system; I couldn’t make it stop.

The guests all ate heartily and bought Alice’s Kitchen, some bought a few.  One of my oldest friends noticed I didn’t join the chopping before dinner.  I asked if he was staying for the traditional clean-up party.  Every dish, pot, pan, and piece of silverware waited for me.

After the party a few friends lingered at the kitchen table.  I washed dishes and listened to the familiar words of every civilization worth remembering; the post-party action report.  Linda Dalal Sawaya had roasted peppers and eggplant on the rack above a gas range on full power.  No one had seen that before.

They turned out right after the smoke cleared, but the concern came back during review.

Final verdict?  If Beirut is the Paris of the Middle East, then dinner with Linda did justice to both without leaving home.  A visit to Alice’s Kitchen is a gastronomical stroll through incredible flavors and aromas.  It made walking it off the next week a thing of joy.

“Dear, if you make it with love, it will be delicious.”

Thank you Linda, and thank you Alice.

6 thoughts on “Walking Through Lebanon”